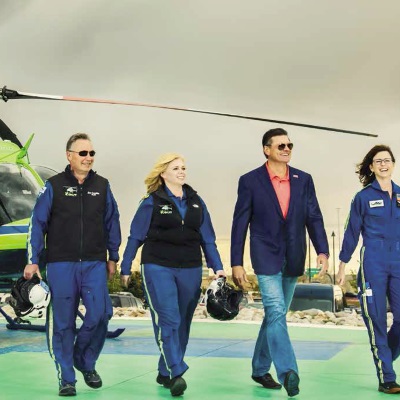 The team to trust when seconds count

On the day Bill Meehan dropped “like a sack of potatoes” at the gym, he had wrestled with whether or not to work out. The Chief Operating Officer for Frontier Airlines was considering pointing his car toward I-70 and heading to his Breckenridge cabin, rather than the Denver health club.

Today, after suffering a massive stroke that left him lying on the gym floor cognizant but immobile and mute, Bill wonders what fate the lazier decision would have rendered. As it turned out, his exercise choice put time and HealthONE on his side. “I think I was sitting on a horseshoe
that day,” he says.

An ambulance crew rushed Bill to HealthONE’s Rose Medical Center, the nearest hospital to his gym. With HealthONE’s AIRLIFE already in the air before he even arrived, Rose doctors were primed, assessing Bill and administering a clot-busting drug in record time. AIRLIFE, the nation’s only dedicated stroke transport team, then whisked him within minutes to Denver’s premier stroke hospital: HealthONE’s Swedish Medical Center.

There, doctors performed a thrombectomy, a delicate procedure in which they thread a stent through a groin artery to the brain and remove the stroke-causing clot. Within two and a half hours of his stroke’s onset, Bill was recovering at Swedish.

“If you’d ever wanted to see a perfect execution from all perspectives, it was how I was handled,” says Bill, who, with his lifelong airline career was highly impressed with AIRLIFE and the entire system. “They were just a fluid motion. And they didn’t even know who I was.”

With his ID and cellphone in some unknown gym locker, Bill was admitted as “John Doe,” and HealthONE providers scrambled to learn who he was while not missing a beat in care. “They treated me like gold the entire time. That’s important to me,” Bill says. “It shows everybody would get the same level of care as I did. Everybody was truly professional.”

Eventually, Bill was able to write his wife’s name and number on a piece of paper. It was 24 hours after his stroke that she arrived from Houston, where they have a second home. “I was preparing myself for a worst-case scenario,” says Jo Meehan. “Will he know who I am? Will he be able to talk? Will he ever recover?”

When she walked into the hospital room, her husband turned and looked at her and said: “Where have you been? “I thought: What? Maybe I heard wrong,” Jo says. “I said: I thought you had a stroke?”

After the relief set in, Jo began wondering what medicine her husband was receiving. “He was talking about a nurse named Beth on a helicopter and saying she came and visited him. I thought he must be on something really good, because he’s hallucinating that people are coming in to see him dressed in flight clothes. But it was true.”

Bill was so impressed with AIRLIFE flight nurse Beth Ahl and the crew, he sought them out after the ordeal to thank them, Jo says. Bill and Jo are also thankful for flight nurse Sherri Bruning, pilot Joe Cocklin, and the throng of HealthONE caregivers who likely changed his life. “Just
looking at him, you’d never know he has been through all of this,” Jo says. “The whole thing is pretty incredible. It’s a prime example of when everything goes right.”