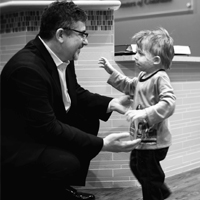 Last fall, when 3-year-old Preston Moore, an energetic little “Daddy’s boy,” picked up the bottle of lighter fluid that would change his life, his father saw him do it. But as little Preston bolted toward the recently-lit barbecue, all Bob Moore could do was watch in helpless horror as his son squirted the liquid on the grill, his body erupting in flames.

Bob, who witnessed the scene on a security monitor in his garage, ran to his backyard, doused the flames engulfing his boy’s body, and rushed to the nearest hospital with Preston’s panicked mom. “By the time we got there, his whole body was like ice,” says Bob, who was cradling his son in his arms. “When I set him on the bed, I had all of his skin on my arms and in my hands.” Preston was quickly airlifted from his small Wyoming town to Denver’s Swedish Burn Center.

“When Preston arrived, he had to be resuscitated in the emergency room; he was in such profound shock,” says Medical Director Philip Fidler, MD, whose recently-opened comprehensive burn program, along with Swedish Medical Center’s Level I Trauma status, made the hospital a top choice in the region for Preston.

With burns over nearly 40 percent of his body, and rare inhalation burns likely resulting from lighter fluid in his mouth, Preston lay unconscious for six weeks, his body wrapped like a mummy, a ventilator providing a lifeline, as the pediatric intensive care specialists used advanced treatments to save his life. “It was touch and go,” Fidler says. “Just taking him to the operating room was dangerous. But the dedication of the team made the difference.”

“If you had seen him at first, you would have never thought he would look this good now . I’m just happy he’ s alive.” – BOB MOORE, Swedish Medical Center Patient’s Father