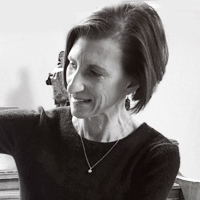 For nearly two years, Janet Braccio ran and hiked on a painful hip, reluctant to admit her always-fit body needed medical attention. But after turning 55, Janet finally listened to her friends and physical therapist, who said she shouldn’t suffer anymore. She went to the doctor and received the shock of her life.

Within hours of an MRI, her physician called Janet, a longtime Boulder resident and public relations specialist, and said she needed to see her right away. While her left hip was indeed injured and needed replacement, the doctor told her that the right pelvis was the real issue. A tumor the size of an orange was invading near the sacrum, the bone that connects the pelvis and the spine.

“I was in utter disbelief,” Janet says. “I couldn’t even process it. I’ve always been so healthy.” Her fitness level, her huge “village” of friends and family for support, and the expertise of the Colorado Limb Consultants, contributed to Janet’s successful outcome. “If the tumor had gotten any bigger, it would have been inoperable,” says Ronald Hugate, MD, the orthopedic surgeon who led the team whose pioneering efforts at Presbyterian/St. Luke’s Hospital helped save Janet’s life and limb.

The tumor was malignant, a type of cancer called chondrosarcoma, which doesn’t respond well to chemotherapy or other therapies. “Surgery was the only option,” says Hugate, who had trained in, and written papers about, the highly complex and rare procedure that involved rebuilding Janet’s core. “The only other surgical option was a dramatic amputation,” Hugate says.

“I definitely had the A-team. They saved my life.” JANET BRACCIO, Presbyterian/St. Luke’s Medical Center Patient