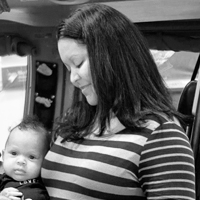 She and her father had just crossed the Kansas border, when Katrina Journey punched her obstetrician’s number into her cellphone. Although her due date was six weeks away, what she thought were harmless Braxton-Hicks contractions had intensified, alarming the soon-to-be, first-time mom. Her doctor’s instructions: Find the nearest hospital.

Hearing the news, her dad, who was driving Katrina to Denver for a short visit, started speeding down the desolate highway of eastern Colorado toward the tiny town of Hugo,  the only place with a hospital within a 75-mile radius. Like its 800-person community, the hospital was small: a 15-bed rural facility not equipped for premature deliveries. But after an exam found that Katrina was already 5 centimeters dilated, it was clear that she and her dad weren’t going anywhere on their own.

“I wasn’t scared yet,” Katrina says. “But I definitely wasn’t having any warm, fuzzy feelings.” Then the hospital called AIRLIFE, HealthONE’s Emergency Medical/Critical Care Transport Service, and Katrina’s increasing fears were calmed. “I think it was the fact that the AIRLIFE crewmembers were so well-trained and the way they were interacting with me and with the hospital in Denver that was reassuring,” she says. “They gave me confidence that everything was going to be OK.”

Finding it too late to fly to Denver for the birth, AIRLIFE nurses began coaching Katrina, who hadn’t taken birthing classes yet. Soon, they were telling her how to push. Baby Kennedy was born weighing 4 pounds, 13 ounces and seemingly healthy. Her Grandpa “Facetimed” her father, Damaune, who was on a trip to Canada and unable to find a flight to Denver until the next day.

“They gave me confidence that everything was going to be OK.” – KATRINA JOURNEY, AIRLIFE Patient