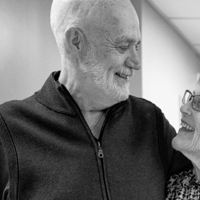 For nearly a decade, Stan Janiec endured more drugs and electrical shocks to his chest than he cares to remember. As his doctors worked to control his atrial fibrillation, a misfiring of the heart’s electrical signals causing an uneven heartbeat, it became increasingly persistent and less
responsive to treatment. Eventually, it began robbing the
71-year-old of the life he had envisioned for his golden years.

“I’d get up and get dressed, and then I’d need to go back to bed,” Stan says, explaining the debilitating fatigue and shortness of breath from chronic AFib, which increases risk of stroke and heart failure. “He couldn’t even walk from the bedroom to the kitchen,” says Stan’s wife, Linda, who missed the energetic lifestyle the upbeat couple had shared.

After the effects of Stan’s last cardioversion procedure (used to shock the heart back into normal rhythm) lasted less than two months, he and Linda had had enough. His Pueblo cardiologist sent him to Denver to Thomas Svinarich, MD, who, working with cardiothoracic surgeon Jason Sperling, MD, identified that Stan was a good candidate for a revolutionary treatment: the Convergent Procedure.

The Convergent Procedure, pioneered by the team at HealthONE’s Rocky Mountain Heart Rhythm Institute, uniquely combines the best of both traditional catheter and surgical ablation treatments to restore normal heart rhythm. This approach results in a viable treatment option for types of AFib previously thought untreatable, which was what Stan had been told. Patients that have undergone the Convergent Procedure are 80-to-90 percent likely to stay out of AFib, with some of the first patients now more than three years out and still doing well. No hospitals outside
of HealthONE in the entire Western United States perform the Convergent Procedure. Stan is now recovering nicely.