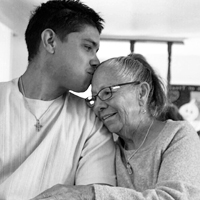 The night he ended up in a medically-induced coma, Nash (Stevie) Vigil had been helping a friend fix his car. The two had finished and were driving to a restaurant when another vehicle T-boned their car, crashing into Stevie’s passenger side. The impact propelled the 24-year-old’s head sideways, slamming it into his buddy’s head. His friend was OK. But Stevie suffered a severe traumatic brain injury and was airlifted to a nearby hospital. His grandmother, who raised him along with his father since age 5, will never forget walking into the hospital room and finding a grandson she didn’t know. Her normally kind and compassionate Stevie was aggressive, combative and incoherent.

“It broke my heart,” Dolores Vigil says, sitting next to Stevie on the couch in their Northglenn home. “He is my heart.” Stevie remained in a coma for a month. But he survived the medical trauma and was transferred to Spalding Rehabilitation Hospital, where a second battle began.

“He had to re-learn everything,” his grandma says of Stevie, who excelled at academics and sports in high school. He couldn’t even talk for three months, a time period that for Stevie remains a blur. “I don’t remember any of it. I was just existing,” he says. Hours of daily therapy loomed ahead for Stevie, whose injury was so severe he couldn’t sit, talk, walk, make eye contact, or even reach for anything. Although it wasn’t easy, a few things came together during his two-month Spalding rehabilitation that helped lead to recovery, including an outstanding brain-injury program and a passionate staff.

“They helped me get my life back.” STEVIE VIGIL, Spalding Rehabilitation Hospital Patient